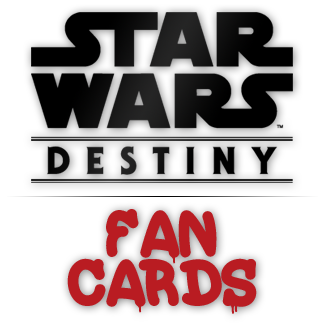 While some thought the exit of Fantasy Flight spelled doom for our beloved game, others took that as a challenge to keep the game they have such passion for alive. Those people decided that, for them at least, the game was not dead, and they took up the mantle to continue making new and great content for it.

The largest of groups, A Renewed Hope, has already released their initial offering, to great success. They weren’t the only group to lead the charge, however. Teams like The Coruscant Initiative and New Destiny Hungary have also thrown their hat in the ring for creating new cards and dice. It is these groups that Kingwood Hobbies begins to celebrate today by offering our print services to help their creations see the light of day.

That’s the real beauty of this game right now. With no high level Organized Play yet, we’re all just folks sitting around the kitchen table playing with our friends and having fun. It’s that environment where the work of a small group in some remote (to you) corner of the world can contribute to whatever form your tabletop enjoyment is coming from these days.

The first two sets on the menu are from New Destiny Hungary. Both have been released digitally in the past, but now come to your tabletop to enjoy.

There are some other Fan Card sets coming up shortly as well. The Coruscant Initiative released their set, Eternal Conflict just today and New Destiny Hungary has their set, Edge of the Galaxy coming out soon. We will leverage our print services any way we can in order to bring these cards to your kitchen table for you.