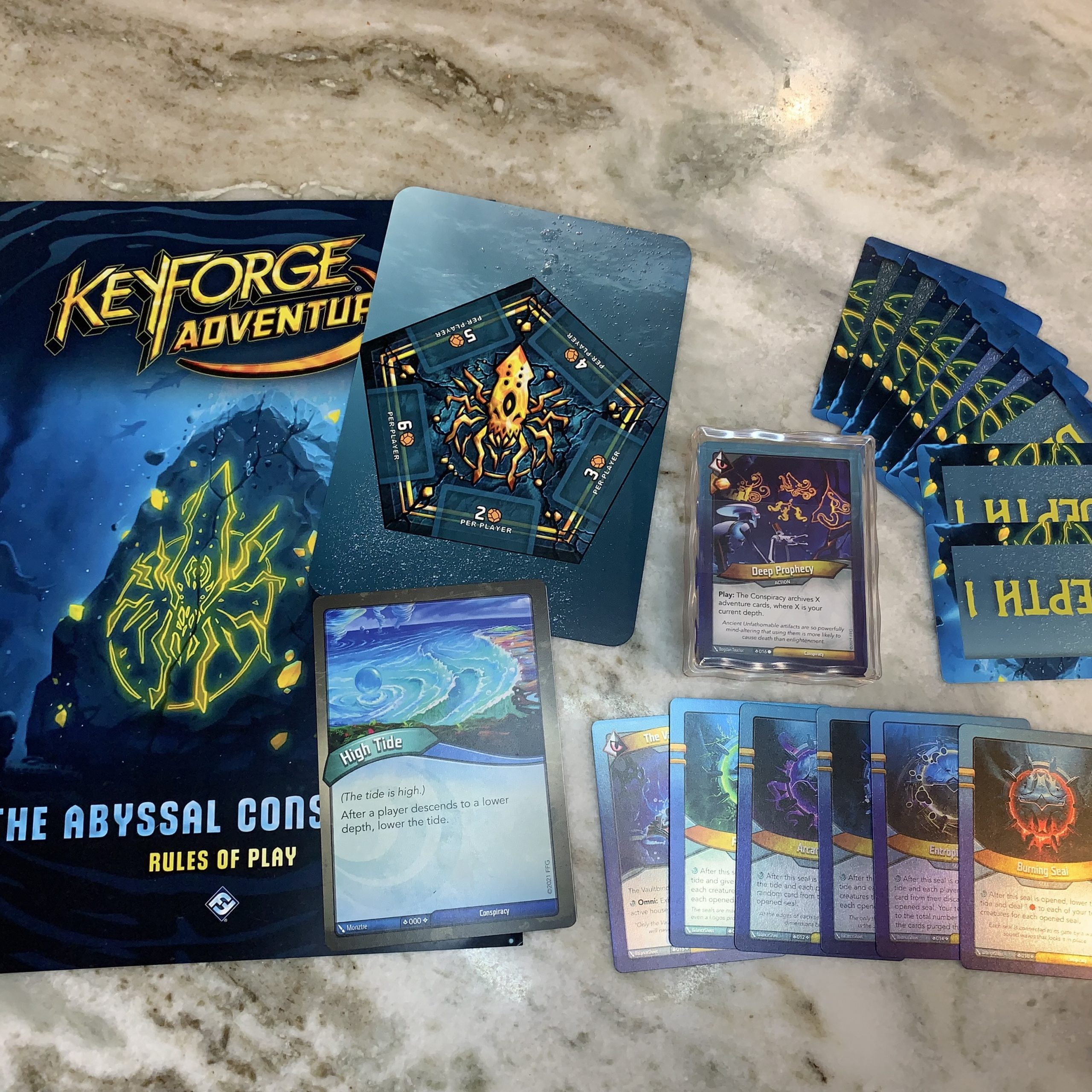 Summer is in full swing, which means it’s the peak season for slipping into swimsuits, slathering on sunscreen and…exploring the ocean’s depths to uncover a villainous and dangerous conspiracy?!?

Well, if you’re a fan of KeyForge Adventures, then yeah, sure! Fantasy Flight Games recently released The Abyssal Conspiracy, the second adventure to expand on the Dark Tidings two-player starter set – and Kingwood Hobbies now offers a limited edition printing that you won’t want to miss.

Earlier this spring, FFG announced KeyForge Adventures, a cooperative play version of KeyForge that pits one to three players – using decks from their existing collections – against a unique, pre-constructed adventure that replaces your usual human opponent and features multiple difficulty levels.

In the first adventure, Rise of the Keyraken, players battle the Keyraken, a powerful creature that absorbs the psychic power of Æmber. Players can choose multiple strategies for defeating this mythological monster. In the second adventure, The Abyssal Conspiracy, players must navigate a grid of nine locations as they descend into the ocean’s depths to uncover the conspiracy and find the tool needed to put an end to its villainy.

Both Rise of the Keyraken and The Abyssal Conspiracy are available as free downloads for fans who simply want a print-and-play experience. However, for players who prefer their KeyForge gameplay frustration-free and their game pieces high-quality, Kingwood Hobbies provides professional printing services for these cards along with unique additional accessories.

Included in this Kingwood Hobbies limited edition printing of The Abyssal Conspiracy:

There’s no conspiracy, scheme, machinations or intrigue going on here – just a quality version of the latest flavor of KeyForge fun for you and your friends and family to explore this summer! Sunscreen not included: we prefer to leave that choice to the individual.

First thing to note. All KeyForge Adventures, so far, are available for free from Fantasy Flight Games. Our offer is for a high-quality printing service for these free cards. To find the free versions, please see the official KeyForge product page.

If you’re a KeyForge player, it’s not much news to you that FFG has released the print-and-play KeyForge Adventures to bring co-op play to this unique game. What might be new to you is that Kingwood Hobbies is bringing its well-loved printing facilities over from Star Wars: Destiny to join the game of professional printings. Our first round of shipments have gone out, and to quote one of our customers, “That Keyraken Card. I can’t stop looking at it.”

Some of the advantages of the Kingwood Hobbies printing are:

But How Does it Play?

As a KeyForge family ourselves, we definitely had to try out this KF Adventures thing as soon as they arrive in-house, so we broke out the oversized KeyForge playmat, shuffled up the three Dark Tidings decks we’d opened, and got to playing.

First, some lessons learned from the Dismukes family about playing Rise of the KeyRacken.

Our first time into the Rise of the KeyRacken gave us a bit of a pause as we tried to figure out exactly what on earth we were trying to do. We all know how to play the game, but what is our strategy? Are we assaulting the KeyRacken directly? Do we need to try and build a battle line? Are we going to try and forge any keys or just go straight through the armor? This, coupled with the confusion of learning how to run the KeyRacken’s turns, made the first several turns of our game a bit of a mess. Cards and tokens everywhere. No one really understanding what’s going on. It wasn’t great.

The KeyRacken, on the other hand, had no such qualms about its strategy and hit the ground running. Some of its first actions were to tack on upgrades that give it extra cards on each of its turns. Since the KeyRacken’s power is directly tied to playing cards, doubling the number of cards played every turn means things are going to get out of hand VERY quickly. I blame Tori’s shuffling skills. I let her shuffle the KeyRacken’s deck, and it let this guy rip out of the gate swinging. I really need to spend more time teaching her the finer points of messing up an opponent’s game with a good shuffle (note: this is a joke. It’s like when I tell Destiny people they should subscribe to my Patreon where I will teach them to roll dice better).

Despite the mess of the early game, we were able to get a grip when Melissa and I combined to thoroughly house one of the KeyRacken’s advancements. She managed to stick a Bombyx on the table while I helped it capture something like 20 aember just before the KR advanced. This six-armored up egg sat there like a giant turtle hoarding all that aember while we got our feet under us.

The mid-game saw us start to land some big shots on the KeyRacken’s body itself, mostly through Melissa’s Saurian monsters (who, incidentally, also let her start spending all that Bombyx aember forging her own keys). Tori’s Shadow cards and my triple Ritual of Balance worked to slow the KeyRacken’s advance, but there was only so much we could do before our opponent began advancing.

We went round and round the table doing work but weren’t quite able to prevent this horror from creeping ever closer towards laying waste to the Crucible. Things were looking pretty grim as we started our last trip around the table. Tori went first and had to do something, anything, to get the KeyRacken below 18 aember. With a bit of desperation in her plays, she was able to just barely accomplish that and punt to me. Now, with defeat looming even closer, I was able to once again just barely hang on to prolong the game one more round.

The final turn came around, and my wife was despondent. Tori and I had scrabbled and clawed and held off the KeyRacken’s last advance as best we could, but Melissa couldn’t keep the game up any longer. The KeyRacken had amassed an insane amount of aember and had a battle line that was multiple rows deep (this game can take up a lot of space). In frustration, she was about to toss her hand down and concede when I looked at her and said, “Honey, just play out your turn.” I didn’t know what was in her hand, but I knew the deck I’d given her. In exasperation, she called Star Alliance and proceeded to lay down her deck’s copy of Selective Preservation.

It was an amazing victory! Melissa was the hero of the tale and saved all of the Crucible from destruction at the hands of the KeyRacken. Tori and I looked on as pleased sidekicks while all the denizens of the Crucible celebrated my lady’s victory.

Rise of the KeyRacken is a really fun way to spend an evening with the family. There’s a bit of a learning curve when it comes to managing all the bits you have to keep track of, but after a few rounds you will get the hang of it and the game will flow much more smoothly. This is definitely one we will pull out again. If you’re looking for a high quality professionally printed version of this Adventure, please consider the Kingwood Hobbies printing.

Per my distributors, Dark Tidings releases “sometime in February”. That means it is time to get your preorders in! If you’re looking for boxes or decks or what have you, it’s supposed to arrive this month! I don’t order a whole lot of extra KeyForge, so make sure you get your order in early if you want to guarantee your boxes.

Dive beneath the waves of the Crucible’s oceans with Dark Tidings, the fifth set of Archon Decks for KeyForge, the world’s only Unique Deck Game! Dark Tidings introduces a brand-new House to the game: the Unfathomable. Replacing Dis in the current cardpool, the Unfathomable specialize in controlling their opponents by exhausting enemy creatures. What’s more, every House gains the power to call upon the tides of the Crucible, gaining advantages from high tide and avoiding the punishments of low tide. Finally, Dark Tidings also brings the possibility of evil twin decks into the game! Any evil twin deck is an exact copy of another deck in existence, except with many of its cards exchanged for their “evil twin” versions, featuring alternate abilities, graphic design, and art.