Dragon’s Maze was the only small set in the block. It contains 156 cards (70 commons, 40 uncommons, 35 rares, 11 mythic rares), including randomly inserted premium versions of all cards in the set. The set focused on the guild system, featuring all of the ten guilds from Ravnica, and multicolor cards. Dragon’s Maze and its boosters did not contain any basic lands; however, as a first in Magic history, the set contained same-block reprints (the non-basic guild gates). Besides these guild gates, boosters could contain shocklands with Return to Ravnica or Gatecrash expansion symbols, and the mythic rare Maze’s End. The frequency at which these cards are found in booster packs are at the same as any other card at their respective rarities.

Dragon’s Maze featured Izzet planeswalker Ral Zarek and, as a throwback to the original Ravnica block, guild champions (maze runners). The expansion symbol is an overlap of the Return to Ravnica and Gatecrash expansion symbols. 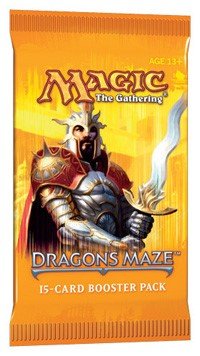