Dragons of Tarkir contains 264 cards (15 basic lands – 5 less than Khans of Tarkir – , 101 commons, 80 uncommons, 53 rares, 15 mythic rares) and includes randomly inserted premium versions of all cards. Like the one from Scourge before, the expansion symbol of Dragons of Tarkir represents a dragon‘s head. This set is supposed to be the ultimate “dragon set”. There are more than twice as many dragons in it than in any other set and they appear in all colors. It also contains many cards that reference Dragons and care about Dragons.

Each of the five clans known from the previous sets is now integrated with one of the Dragon broods. Only the icons of the broods, first seen in Fate Reforged, appear as watermarks in the text boxes of the cards. The clan symbols have disappeared. The icons have no effect on gameplay. There are several “crossover cards” that present alternate versions of characters and situations from the previous timeline. 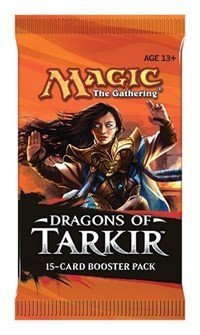 You're viewing: Dragons of Tarkir Booster Pack $4.99
Add to cart