Fate Reforged was announced at the Wizards of the Coast panel at PAX Prime on August 31, 2014. It contains 185 cards (10 basic lands, 70 commons, 60 uncommons, 35 rares, 10 mythic rares) and includes randomly inserted premium versions of all cards. The expansion symbol of the set is a stylized representation of two opposing planes or realities because the large sets of the block represent alternative timelines. This middle set, representing the past, is the precursor to both. The set had to be designed so it worked mechanically with both Khans of Tarkir and Dragons of Tarkir.[7] It is designed to be drafted with both large sets, while the large sets are never drafted together. Fate Reforged draft is one pack of Fate Reforged and then two packs of Khans of Tarkir.

Because the clans of Fate Reforged are less defined, the set does not contain three-color gold cards. The color identity of the cards is instead marked by the use of hybrid ability activation costs (for example a Temur card with green mana cost, and blue/red hybrid ability cost). This allows for these cards to be played in two-color decks (in this example either green/blue or green/red). Like in Khans of Tarkir watermarks are used on the cards for the different clans, while adding slightly altered watermarks for the related dragon broods. The foil versions of the cycle of Sieges and Crux of Fate (all of which present a choice between Khans and Dragons) have a special overlay and finish which transitions seamlessly between the expansions symbols of Khans of Tarkir and Dragons of Tarkir.

The set features the colorless planeswalker Ugin, the Spirit Dragon. 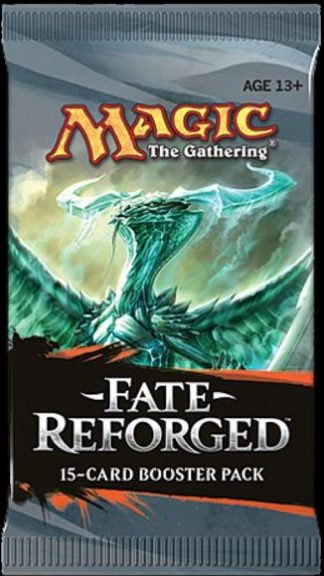