Khans of Tarkir contains 269 cards (20 basic lands, 101 commons, 80 uncommons, 53 rares, 15 mythic rares), and includes randomly inserted premium versions of all cards. It is also the first set since Dragon’s Maze to not have any Dragon creature cards. The expansion symbol depicts crossed swords on a shield, similar to the symbol of Legions.

Because of post-release changes in the block structure in 2015, Khans of Tarkir was only played in Standard for 18 months. 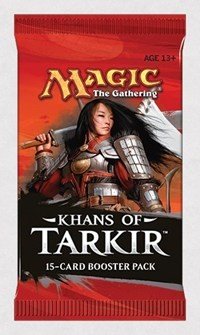 You're viewing: Khans of Tarkir Booster Pack $9.99
Add to cart