Return to Ravnica contains 274 cards (25 basic lands, 101 commons, 80 uncommons, 53 rares, 15 mythic rares), including randomly inserted premium versions of all cards in the set. As was the case with the original Ravnica block, Return to Ravnica focuses on the guild system and multicolor cards. Five guilds — the Azorius Senate, Golgari Swarm, Izzet League, Cult of Rakdos, and Selesnya Conclave — are featured in Return to Ravnica; the other five guilds appear in the following expansion, Gatecrash. Because R&D had to fit in five guilds, rather than four, the set contained more uncommon cards than usual. It is is unknown what the expansion symbol of this is set is meant to represent, though some people think it is a stylized Orzhov Mitre, a nib of a fountain pen or a gate. 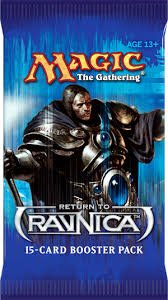 You're viewing: Return to Ravnica Booster Pack $4.99
Add to cart