Scars of Mirrodin contains 249 cards (101 Common, 60 Uncommon, 53 Rare, 15 Mythic, 20 Basic Lands), including randomly inserted premium versions of all cards in the set. The expansion symbol of the set is a corroding hexplate from the Glimmervoid.

Scars of Mirrodin returns to the plane of Mirrodin, previously the setting of the block and the set of the same name.As Mirrodin is an artificial plane, the number of artifacts and cards relating to that permanent type is larger than in other sets and mechanically reflects the themes already explored in the previous sets.

The set describes the conflict between two major factions – one being Mirrodin, and the other being the invading forces of Phyrexia. Cards aligned with these two factions are watermarked, as previously seen with the guild aligned cards in Ravnica block. The two factions are also mechanically separated, with the Phyrexians dealing largely with poison counters, Infect and Proliferate, as well as sacrifice or leaves play effects, while the native Mirrans use mechanics already introduced or similar to those of the original Mirrodin set – Imprint, Indestructible, charge counters the new Metalcraft mechanic, as well as Mana Myr and Spellbombs.[7] Only 40 cards of the set have the Phyrexian symbol on them. All other cards except for Basic lands and Planeswalker cards have a Mirran watermark. 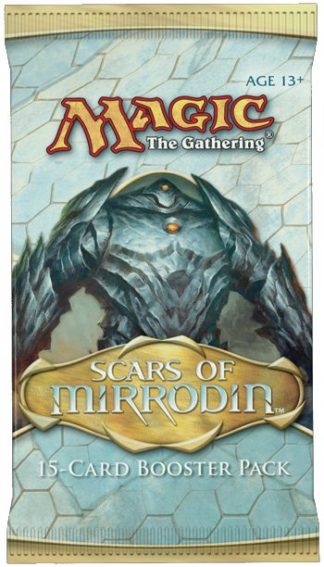 You're viewing: Scars of Mirrodin Booster Pack $19.99
Add to cart