The SolForge Fusion Premium Playmat provides the best experience for play and competition. It helps protect players’ cards when being moved or lifted during games. Adds easy-to-understand card locations to support new players, and improve tournament play. Adds durability to an integral part of the SolForge Fusion experience. Provides a visual landscape that helps tell the story of SolForge Fusion.

From Richard Garfield, creator of Magic the Gathering, and Justin Gary, creator of the Ascension Deckbuilding Game, comes SolForge Fusion, the next evolution in trading card games. Experience the first-ever Hybrid Card Game with over 15,000 cards in the base set alone!

In SolForge Fusion all decks are algorithmically generated so no two decks are alike. Then you take 2 decks and shuffle them together to battle!

You and your opponent compete in strategic lane-based combat. When you play a card it levels up, allowing you to access new powers and abilities to defeat your opponent and damage their creatures. The first player to bring their opponent down to zero health wins!

Be the first to review “SolForge Fusion Playmats” Cancel reply 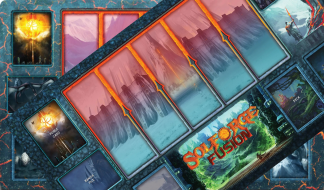