Your one-stop place to begin playing Solforge Fusion in style. This bundle contains everything you need to hit the ground running. With this order you’re getting:

PLUS, 10% off any other Solforge Fusion product in this order*. That includes:

AND finally, YOUR OWN PERMANENT DISCOUNT COUPON TO RECEIVE 5% OFF ANY FUTURE ORDERS OF SOLFORGE FUSION PRODUCTS AND ACCESSORIES.

*Note, the additional 10% off will be manually refunded shortly after purchase because I’m not good enough with Internets to have it applied automatically.

From Richard Garfield, creator of Magic the Gathering, and Justin Gary, creator of the Ascension Deckbuilding Game, comes SolForge Fusion, the next evolution in trading card games. Experience the first-ever Hybrid Card Game with over 15,000 cards in the base set alone!

In SolForge Fusion all decks are algorithmically generated so no two decks are alike. Then you take 2 decks and shuffle them together to battle!

You and your opponent compete in strategic lane-based combat. When you play a card it levels up, allowing you to access new powers and abilities to defeat your opponent and damage their creatures. The first player to bring their opponent down to zero health wins! 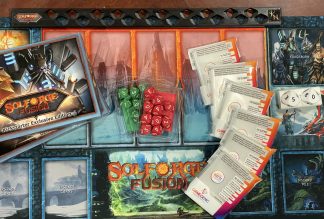